The Apple HomePod: How does it measure up?

Competition to build the best smart speaker is heating up between the major tech giants. Currently, the space is dominated by Google and Amazon. Google has the Home, Home Max, and Home Mini; while Amazon has its own line of multiple Echo devices. Not one to shy away from competition, Apple is introducing their own smart speaker. The Apple HomePod is now available to order as of January 26th. With the announcement of the release date, Apple has entered the fray. How does the Apple HomePod compare? Let's take a look at everything we know about the Apple HomePod.

The HomePod is a powerful, pint sized smart speaker that utilizes Apple's Siri assistant, to answer questions and stream music. The HomePod adapts the music that is played and separates the different tracks of a song so the sound is more crisp and easy to listen to. The HomePod streams music via Siri and Apple Music, which means you'll have to buy a subscription to Apple Music if you want to stream music with the smart speaker. Beyond music, the HomePod can control features in a smart home and work as a personal digital assistant. 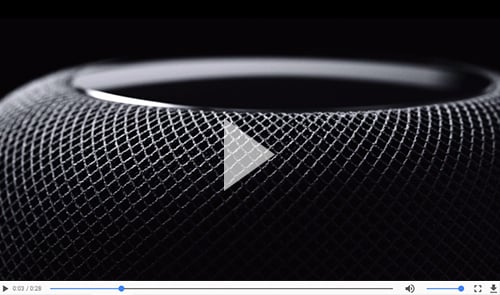 The HomePod has a wonderful deep sound courtesy of its custom amplifier, which helps to create a deep, rich bass. The HomePod uses Apple's advanced algorithms to analyze each song individually and “dynamically tune the frequencies for smooth, immersive sound” according to Apple's website.

Next year you'll be able to put two HomePods in the same room and they will automatically detect each other and change the sound that both emit. How cool is that?

The Homepod has Apple's A8 chip, which is the same chip used in the iPhone 6 and 6 Plus, the iPad mini 4 and the 4th generation Apple TV. The A8 chip powers the Apple HomePod's complex functions including the mixing, and echo control. 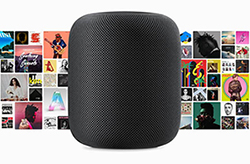 Setting up the HomePod is incredibly simple. Plug the HomePod into a power source and your iPhone will automatically sync up with it. Then, ask the HomePod questions, control your smart home and play music. The HomePod can hear your requests even if music is playing loudly, just say:

To play music with the Apple HomePod you'll have to buy a subscription to Apple Music at a cost of $99 annually, though you can try Apple Music free for three months before getting a full subscription. With Apple Music and Siri, your HomePod will keep track of the kind of music you like and suggest music for you to listen to.

If you're listening to music with your HomePod, say "Hey Siri, I like this song" or "Hey Siri, add this to my playlist." With the large amount of potential commands that you can ask Siri, playing music on your HomePod is easy. 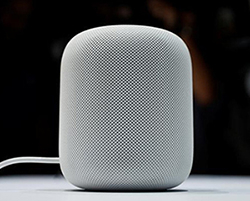 Beyond the musical capabilities of the Apple HomePod, Apple's smart speaker also works as an intelligent digital assistant. The HomePod will tell you the latest news and give you traffic updates. With Siri built in, the HomePod is able to answer your most pressing questions: like how close the earth is to the sun, how to convert measurements and last night's sports scores. Apple is always adding updated abilities to the HomePod as well, so be on the lookout for enhanced features in the future.