Is there a serious competitor to the Apple Watch? 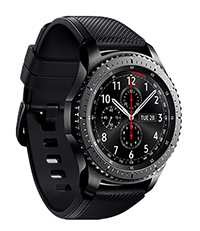 Design:
The Gear S3 is a smartwatch that begs to be noticed, it's large and easy to spot on anybody's wrist. It looks like a sportwatch, and it isn't as sleek and sophisticated looking as other smartwatches. If you're someone who likes small watch designs, or if you're somebody who doesn't like large watches, the Gear S3 isn't for you. If you like large watches or if you have a larger wrist you'll enjoy the design of the Gear S3.

Features:
The Gear S3 is Samsung’s preeminent smartwatch, and as such comes with Samsung Pay, which is Samsung’s competitor to Apple Pay and Android Pay. Samsung Pay utilizes tap to pay technology, effectively eliminating the need to carry around credit cards or cash. When you checkout at a retailer that utilizes Samsung Pay, simply tap your phone to the reader and you are good to go.

Beyond paying for things with Samsung Pay, the Gear S3 is able to stream music from Spotify. If you buy a Gear S3 you'll have to upgrade to the Spotify premium subscription model; streaming doesn't work on the free Spotify mode with ads. Additionally, if you have Apple Music and you want to use that service with your Gear S3, you're out of luck, Apple Music is currently only supported on the Apple Watch. Music streaming on the S3 is well fleshed out, though we would like to see the ability to download specific playlists in future Gear models.

Part of what makes the Gear S3 such a captivating device is its standalone LTE connectivity. The Gear S3 doesn't rely on a connection to your cell phone to work, it can work independently to send and receive Bluetooth calls and texts. The Gear S3 and your current cell phone share the same number, though if you want to add LTE to your watch you'll have to pay extra.

No smartwatch is complete without fitness features. If you're someone who owns a Samsung phone (Note or Galaxy) you'll appreciate Samsung S Health integration with the Gear S3 watch. The S Health app on the Gear S3 can track your heart rate, water intake, sleep and also remind you when you need to stand up and walk around. The S Health app is a surprising success considering Samsung doesn't have the kind of fitness tracking record that Fitbit has. 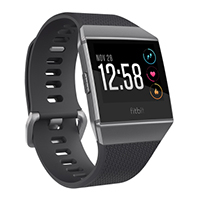 Design:
The Fitbit Ionic is a minimalist smartwatch, the antithesis of the bulky Gear S3. Its sharp angular build seems more modern than the soft edges on the Apple Watch Series three or the roundedness of the Gear S3. The Fitbit isn't heralded as the most attractive watch, since it's built for use and functionality. Additionally, the Ionic isn't completely touch sensitive, its physical buttons are necessary as the touch experience is very laggy and slow.

Features:
The Fitbit works with both Android and Mac phones, and connects with both Mac and Windows PCs. App support for the Ionic isn't very robust, with the Ionic only utilizing basic apps like weather, Pandora music, alarms, and a timer/stopwatch.

Playing music on the Ionic is a frustrating and difficult process. The Ionic can only play music files synced from a computer or play music via a paid Pandora account. With the Apple Watch having Apple Music and the Gear S3 having Spotify integration, the music streaming ability of the Ionic is clearly lacking.

Workouts on the Fitbit are what you would expect from a Fitbit device. The Ionic allows you to track your workouts, along with basic fitness activities like running, walking, etc. Additionally, the Fitbit ionic can track breathing, heart rate, sleep, and other kinds of health related information. If you're looking to get the best fitness tracker available, go with the Ionic.

Though there are many competitors to the Apple Watch, there's a reason it remains the most popular smartwatch. Its features, functionality, and ease of use make it the absolute go to for people wanting to get started with wearable technology. Other devices like the Gear S3 and Fitbit Ionic might be better in certain respects, but for the best overall experience we recommend the Apple Watch Series 3, at least until another competitor enters the ring.