Chromebook vs. Laptop: What's the difference? 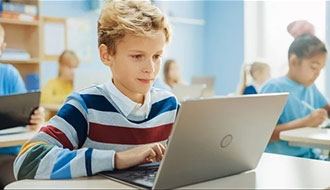 If you’re in the market for a portable computer, the chances are that you’re probably considering either a Chromebook or a traditional laptop like a Windows laptop or a MacBook. Which one should you get? Well, to make the right choice, first, you must understand how they work and what sets them apart. Also, it’s important to keep in mind what you’ll be using it for and how much you are willing to spend.

At first glance, a Chromebook and a regular laptop may look similar. After all, Chromebooks are technically laptops too. But, at the same time, these devices are very different. So, what’s the difference between a Chromebook and a laptop? We break down for you how a Chromebook differs from other laptops, so you can make an informed decision and choose the ideal device, whether for you, your kids, your school, or your business.

Differences between a Chromebook and a laptop

As you can see, many crucial characteristics set Chromebooks apart from other laptops, so let’s take a closer look at some of the main differences. Chromebooks use the Google Chrome web browser as their primary user interface. And Google Chrome is the main component of ChromeOS, serving as the web app platform. While it’s possible to install and use some other web browsers on a Chromebook, the pre-installed Google Chrome browser is, without question, the best option for Chromebooks since it’s the basis of their operating system. Plus, you can install many useful extensions to increase its functionality. On the other hand, when it comes to other laptops and web browsers, you have many options. Depending on your preferences and needs, you can choose any web browser, such as Google Chrome, Mozilla Firefox, Microsoft Edge, or Opera. Although initially designed to rely on web-based apps for tasks using the Google Chrome browser, Chromebooks released in or after 2017 can run Android apps from Google Play Store, while those models with Linux support can also run Linux apps. Chrome Web Store and Google Play Store include thousands of apps for various tasks. One of the main concerns for many people is access to Microsoft Office. Even though you can’t install the Windows desktop version of Microsoft Office on a Chromebook, the good news is that you can run MS Office apps through the online version of Microsoft Office.

Regarding laptops, you can download and install almost any app or software you want. For example, you can download and install apps from Microsoft Store or third-party software directly from websites on a Windows laptop. Likewise, you have the Mac App Store at your disposal for MacBook models, and for Linux laptops, you can install third-party software directly from developers. Chromebooks have less local storage space than most laptops, typically between 16GB and 32GB. That’s because Chromebooks are primarily cloud-based, which means they rely more on cloud storage, namely that of Google Drive, than local storage. ChromeOS doesn’t need much storage space, and most apps run from the cloud, not an internal hard drive, as with traditional laptops. Also, you don’t store your documents, photos, music, or other files on your device, but you save them online to Google Drive. This can be a good thing because if your Chromebook gets damaged or stolen, all your files will be safe.

In contrast, laptops typically have at least 256 GB of disk storage, but many models come with much more storage space, like up to 1TB. You can save files on the hard drive, but you also have the option to store files online using cloud storage services, such as Google Drive, Dropbox, or OneDrive. Security is one of a Chromebook’s strong suits since these devices have built-in virus protection, and Chrome OS is safe from malware by default. Google has taken numerous security measures for its ChromeOS, including sandboxing, automatic updates, verified boot, and data encryption. All this makes Chromebooks one of the safest laptops you can use.

Unlike Chromebooks, traditional laptops are more susceptible to malware and viruses and are attractive targets for hackers, especially Windows laptops. So, to keep a Windows laptop safe from malware and viruses, it’s necessary to install the latest antivirus software regularly. MacBooks are considered a little bit safer but still more vulnerable to viruses and malware than Chromebooks. Laptops: Depends on the model and how the laptops is used, typically 2-6 hours Laptops: Different sizes and weights, some models more portable than others

Chromebooks are usually thin and light, which makes them highly portable. This means they are an excellent choice for those who need a device they can easily carry everywhere, for example, students or people constantly on the go. Laptops come in different sizes and weights, so some are less portable than others. In general, Chromebooks are considered more portable than average Windows laptops. Of course, those Windows laptops that can match Chromebook’s portability are usually more expensive. The same goes for MacBooks – they can be thin and very portable but come at a much higher price.

Laptops: Prices vary from one model to another

Ultimately, both Chromebooks and regular laptops have advantages and disadvantages that you should consider before making your final decision. Don’t forget that it all comes down to your needs, workload, and budget. Chromebooks are budget-friendly, easy to set up and use, very secure and portable, and have long battery life. Also, they are great for online activities such as web browsing and research, checking email, watching videos, listening to music, or doing schoolwork. All this, and the Google Classroom app that comes with Chromebooks, has made them a popular choice for K-12 schools that issue laptops to their students and teachers. Chromebooks are also an excellent choice for parents whose children need a simple laptop for learning and fun and for all those individuals or business users who don’t need a powerful device for more complex tasks. However, for those who need a more powerful, flexible, versatile machine, specific programs only available on Windows or macOS, or advanced software for performing more demanding tasks, such as video or photo editing, a Windows laptop or a MacBook is a better choice. For instance, these laptops are great for creative professionals, power users, or serious gamers.

Whether you choose a Chromebook or another laptop, make sure your device is protected against everyday mishaps, like drop damage, cracked screens, or liquid spills. Our Chromebook and laptop insurance plans cover all makes and models and feature unlimited claims. Explore your options and get your free quote today!